Singer Michael Jackson has been found innocent on all 10 charges of child abuse at the end of his trial. 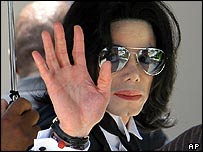 The singer strenuously denied the charges of molesting a 13-year-old boy. There were cheers from his fans outside the court as the verdicts were read.

He was also cleared of giving the child alcohol and conspiring to kidnap him and his family.

The star is now free but did not speak to the public as he left court in Santa Maria, California.

The BBC’s Daniella Relph in Santa Maria said Jackson had been seen wiping his eyes in court as the verdicts were read.
Of the jury’s decision, she said: “They did not believe [accuser] Gavin Arvizo and did not trust his family.”

She said there was “complete hysteria” outside court with the star’s music pumping out.

Judge Rodney Melville told the singer before he left: “Bail has been exonerated, you are free to go.”

Jackson was in court with family members including father Joe, mother Katherine and sisters LaToya and Janet.

His trial began in February and the jury retired on 3 June. More than 100 witnesses took the stand, including Gavin Arvizo and his mother Janet.

The trial was sparked after British journalist Martin Bashir made a documentary in which Jackson admitted sharing his bed with children.

Bashir gave evidence but refused to answer many of the questions put to him.

And actor Macaulay Culkin denied being abused by Jackson when he was a child star. But Mr Jackson did not take the witness stand himself.

Judge Melville, who presided over the trial, allowed past allegations against Jackson to be aired in court.