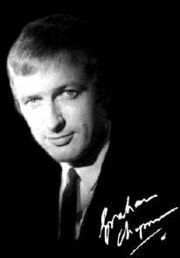 Graham Chapman, co-author of the ‘Parrot Sketch,’ is no more.

He has ceased to be, bereft of life, he rests in peace, he has kicked the bucket, hopped the twig, bit the dust, snuffed it, breathed his last, and gone to meet the Great Head of Light Entertainment in the sky, and I guess that we’re all thinking how sad it is that a man of such talent, such capability and kindness, of such intelligence should now be so suddenly spirited away at the age of only forty-eight, before he’d achieved many of the things of which he was capable, and before he’d had enough fun.

Well, I feel that I should say, “Nonsense. Good riddance to him, the freeloading bastard! I hope he fries. “

And the reason I think I should say this is, he would never forgive me if I didn’t, if I threw away this opportunity to shock you all on his behalf. Anything for him but mindless good taste. I could hear him whispering in my ear last night as I was writing this:

“Alright, Cleese, you’re very proud of being the first person to ever say ‘shit’ on television. If this service is really for me, just for starters, I want you to be the first person ever at a British memorial service to say ‘fuck’!”

You see, the trouble is, I can’t. If he were here with me now I would probably have the courage, because he always emboldened me. But the truth is, I lack his balls, his splendid defiance. And so I’ll have to content myself instead with saying ‘Betty Mardsen…’

But bolder and less inhibited spirits than me follow today. Jones and Idle, Gilliam and Palin. Heaven knows what the next hour will bring in Graham’s name. Trousers dropping, blasphemers on pogo sticks, spectacular displays of high-speed farting, synchronised incest. One of the four is planning to stuff a dead ocelot and a 1922 Remington typewriter up his own arse to the sound of the second movement of Elgar’s cello concerto. And that’s in the first half.

Because you see, Gray would have wanted it this way. Really. Anything for him but mindless good taste. And that’s what I’ll always remember about him—apart, of course, from his Olympian extravagance. He was the prince of bad taste. He loved to shock. In fact, Gray, more than anyone I knew, embodied and symbolised all that was most offensive and juvenile in Monty Python. And his delight in shocking people led him on to greater and greater feats. I like to think of him as the pioneering beacon that beat the path along which fainter spirits could follow.

Some memories. I remember writing the undertaker speech with him, and him suggesting the punch line, ‘All right, we’ll eat her, but if you feel bad about it afterwards, we’ll dig a grave and you can throw up into it.’ I remember discovering in 1969, when we wrote every day at the flat where Connie Booth and I lived, that he’d recently discovered the game of printing four-letter words on neat little squares of paper, and then quietly placing them at strategic points around our flat, forcing Connie and me into frantic last minute paper chases whenever we were expecting important guests.

I remember him at BBC parties crawling around on all fours, rubbing himself affectionately against the legs of gray-suited executives, and delicately nibbling the more appetizing female calves. Mrs. Eric Morecambe remembers that too.

I remember his being invited to speak at the Oxford union, and entering the chamber dressed as a carrot—a full length orange tapering costume with a large, bright green sprig as a hat—-and then, when his turn came to speak, refusing to do so. He just stood there, literally speechless, for twenty minutes, smiling beatifically. The only time in world history that a totally silent man has succeeded in inciting a riot.

I remember Graham receiving a Sun newspaper TV award from Reggie Maudling. Who else! And taking the trophy falling to the ground and crawling all the way back to his table, screaming loudly, as loudly as he could. And if you remember Gray, that was very loud indeed.

It is magnificent, isn’t it? You see, the thing about shock… is not that it upsets some people, I think; I think that it gives others a momentary joy of liberation, as we realised in that instant that the social rules that constrict our lives so terribly are not actually very important.

Well, Gray can’t do that for us anymore. He’s gone. He is an ex-Chapman. All we have of him now is our memories. But it will be some time before they fade.

3 thoughts on “Always look on the bright side of death”